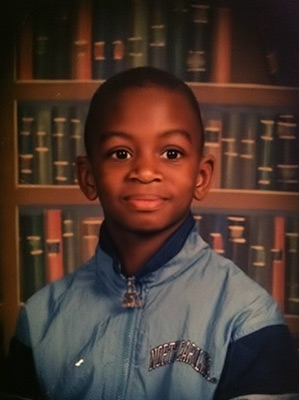 Marcus at the age of 8, already in UNC gear!

Growing up in Northern Virginia, Marcus Ginyard could hardly ever be caught without a basketball in hand. From as early as age five, Marcus played on local teams, racing up and down the court, exposing a natural passion for the sport. He learned his first set of skill from both his older brother Ronald and his mother Annise. Before long, it was clear that he had a special talent for the game of basketball. In fact, Marcus and Ronald played so often that their parents decided to utilize their large backyard to build a small basketball court, which allowed the boys to practice, conveniently, just a few shorts steps away from their bedrooms. Both Marcus and Ronald spent days on end in their backyard, going through drills and playing one-on-one. Ronald, now a high school basketball coach, played a major role as an instrumental guiding force in Marcus’ development as a player.

During his adolescent years, Marcus found a great deal of success in the Amateur Athletic Union (AAU) circuit. At age 13, he became a part of his first national championship team with the DC Blue Devils of the Washington, D.C. area. His team’s roster at that time included former NBA stars Ty Lawson, Roy Hibbert and Dante Cunningham. Marcus chose to play his high school basketball at Bishop O’Connell High School in Arlington, Va. His coach, Joe Wootten, son of Hall of Fame coach Morgan Wootten, pushed Marcus to improve his game in order to prepare him for collegiate level competition. Marcus also benefited from having Ronald on staff as an assistant coach as well.

There was no question that by this point, basketball was an extremely important part of Marcus’ life, but parents Ronald Sr. and Annise never let it slow down his academic progress. Ronald Sr., a 23-year U.S. Marine Corps veteran, and Annise, a U.S. Air Force veteran, constantly preached responsibility, discipline and hard work. Marcus was pushed just as hard in the classroom as he was on the court, leading him to earn National Merit Scholar recognition.

Living less than an hour away from the University of Maryland, Marcus grew up watching many heated Atlantic Coast Conference (ACC) battles. It was his dream from an early age to play at such a high level of competition. Even at a young age, it was noticed that Marcus had a particular connection with The University of North Carolina at Chapel Hill, attending the Dean Smith Carolina Basketball Camp several times growing up. After his sophomore season at Bishop O’Connell, Hall of Fame coach Roy Williams offered him a full scholarship to play basketball for the University. Marcus accepted without hesitation. He entered UNC with fellow classmates Michael Copeland, Danny Green, Bobby Frasor and Tyler Hansbrough.

In 2012, the Ginyard family founded the Marcus Ginyard Basketball Camp, with the aim to use the game of basketball to give back to the community. It’s the mission of Marcus Ginyard Basketball Camp to provide a complete, in-depth, quality athletic experience in the development of the youth. The camp is designed to promote character, discipline, hard work, sacrifice, and teamwork. MGBC seeks to create an atmosphere of giving that will uplift the community by revealing the positive power of sports. The camp hosts free two-day clinics for boys in girls in Chapel Hill and Wilmington North Carolina.

Ginyard began his college career with injury, breaking his wrist in July of 2005 during summer workouts in Chapel Hill, N.C. He had surgery to insert a screw, but still managed to be available for the first practice of the season. He went on to be named a starter for the first half of his freshman season, helping his team reach the NCAA tournament, a feat that no one expected due to players leaving school early for the NBA after UNC’s national championship season the year before.

The following season, Marcus, again, played an important role on a young team. The 2006-2007 Tar Heels would go on to become ACC regular-season champions (the first of three consecutive ACC title during his college career). They would be crowned ACC Tournament champions in Tampa, Fla. a week later. Eventually, Marcus and the Tar Heels lost a close game to Georgetown in the Elite 8 round of the 2007 NCAA tournament.

Marcus captained the team his junior season, becoming an essential part of the 2008 ACC Championship and Final Four season. He was selected to the ACC-All Defense Team, while also being named to All-ACC Tournament Team. The following year, Marcus was forced to redshirt midway through the season due to his slow recovery from surgery on a broken bone in his foot. His team would go on to win the 2009 National Championship.

He returned the following season for his last year of eligibility. It was a rough season for UNC, relatively unsuccessful by the standards of such a storied program, but Marcus was determined to continue to play after college, aspiring to high hopes and dreams. Marcus graduated from the University of North Carolina with a bachelor’s degree in Communications. 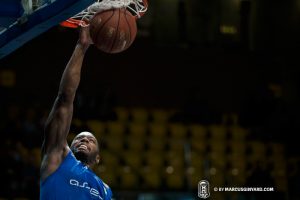 Marcus began his professional career in the German Basketball Bundesliga (BBL) with BBC Bayreuth. It was the team’s first year in the BBL, having won the championship of the second division the year before. Marcus quickly became a strong contributor for the club, as well as a Bayreuth fan favorite. The team, however, did not experience much success, finishing nearly at the bottom of the standings, but still securing a position in the top division for the following season. Marcus finished the season averaging 11 points, four rebounds and two assists per game.

Ginyard’s second professional season took place with Ironi Nahariya in Israel in the second division. Marcus felt capable and deserving of a first division job in Europe after a respectable rookie season in Germany, but found that navigating the business side of basketball was not so simple. He accepted the opportunity to continue to play with open arms, and worked to put himself in the best position to make it back to a first division job the following year. Marcus finished the season averaging 21 points and seven rebounds.

Marcus’ third year was spent with Anwil Wloclawek in the Polish Tauron Basket Liga (TBL). There he was motivated by his return to a top division team and was a strong leader for his team, helping them to reach the semi-finals of the playoffs. In this season Marcus averaged 12 points and four rebounds per game. 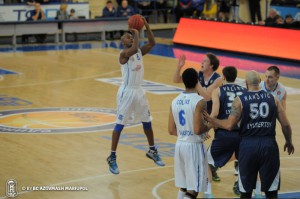 Marcus’ fourth season started with BC Azovmash in the Ukrainian Superleague. It began with Marcus suffering a broken hand, but he was able to bounce back successfully and have his most productive season in Europe to date. In the Ukrainian Superleague he averaged 15.5 points and 5.3 rebounds along with 2.3 assists. BC Azovmash also participated in the VTB League, where Marcus averaged 14.8 points, 4.3 rebounds and 1.5 assists. In the middle of the season, he transferred back to Polish TBL, to play for Stelmet Zielona Góra. There he helped his team reach the Polish League Finals.

In the 2014-15 season Ginyard played for the Westchester Knicks, the NBA Development League affiliate of the New York Knicks. Marcus only played in 18 games with Knicks, averaging 7.5 points and 4.3 rebounds and 2 assists per game. 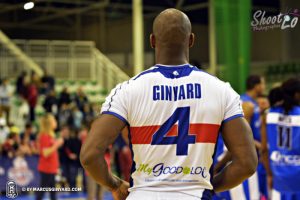 For his 6th year of professional basketball, Marcus played in the French Pro B with Hermine Nantes Atlantique. It was his first full season played since 2014/15. He helped his team reach the playoffs for the second consecutive season, averaging 9.6 points and 3 rebounds per game along with a career best 38% from 3 point range.

Marcus’ 7th season was spent in Poland playing for Energa Czarni Słupsk. This was the third time that his career landed him in Poland. In 42 games, he averaged 11 points, 5 rebounds, 2 assists and one steal per match. Marcus and his team wrote a page of history in Polish basketball this post-season, becoming the first 8 seed to defeat the top seed team during the playoffs.

In his 8th season as a pro, Marcus played for KK Rabotnički in the Macedonian First League. They were unsuccessful in qualifying for the FIBA Europe Cup, but found tremendous success in the National League, boasting a 29-2 record and easily winning the Macedonian League Championship. Marcus averaged 16 points, 5 rebounds and 2 assists per game. He was also awarded Co-Forward of the Year honors. 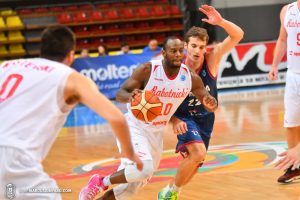 Ginyard, in his 9th season, joined CSM Oradea in Romania. In addition to the Romanian championship, they also competed in the FIBA Europe Cup. In February 2019, Ginyard left CSM and joined Asseco Arka Gdynia in Poland for the remainder of the ’18-’19 season. Arka Gdynia finished the regular season with the best record, and went on to win the bronze medal of the Polish League.

In April 2020, Marcus signed a three year extension and will now play in the Basketball Champions League in addition to the Jeep Elite Pro A.

My career – year by year