This season’s playoffs will be my first professional post-season experience. In college I was very familiar with championship play, but have not since had the opportunity to play for a championship. My team this season is more than equipped to compete for the Polish Championship, and I’m extremely excited to begin our playoff journey! Our first opponent, Asseco Prokom Gdynia, has held the title of Polish Champion for the last 9 years, so there’s no doubt that we will be challenged from the very beginning.

My current teammate Przemysław Fransunkiewicz, former Polish National Team member, won two Polish championships with Asseco Prokom the previous two years. I took a minute to ask him a few questions about the playoff experience here in Poland, and what I should expect. Here’s what he had to say:

MG: What motivates you to play basketball?

PF: I love to compete. All my life I’ve enjoyed the thrill of competition. Things are more interesting to me when they are competitive. In particular with basketball, I want to compete in championship games; I want to win!

MG: What do you remember most about your first playoff game?

PF: My first playoff game I was maybe 21 years old, and we were the 7 seed, playing against my previous club Trefl Sopot. I remember very clearly that the playoffs were being played with much more energy and intensity than the regular season.

MG: How much does making the playoffs mean to you?

PF: Personally, I feel like if you don’t reach the playoffs, the season is a failure. If you aren’t playing for a championship it means nothing.

MG: What does Anwil need to do in order to be effective in the playoffs?

PF: We need to play with an extremely high level of intensity and speed. We have an advantage with our depth, and as the playoffs progress, we should be able to out-last teams physically.

MG: How do you plan to help your team in the playoffs?

PF: At my position, I feel like I am responsible to do a number of different things at a high level. Some games I’ve had a high number of assists, other games I’ve scored more, and others I’ve had some blocks. One thing I will need to do throughout the playoffs consistently is rebound. Most importantly, I want to fit into the game plan and play with a lot of energy.

MG: What do you like about playing with Marcus?

PF: I wish that I could be on the court more with Marcus because I believe that he really understands the game of basketball. I think of him as a winner. I know that when the team is up by 10 points, he wants to be up by 20. He’s always having fun when he plays and he provides us with a lot of positive energy.

MG: What advice do you have for Marcus in his first playoff experience?

PF: The only advice that I have for Marcus is to continue to play aggressive like he has this past month. I don’t see another player in this league that can stop him. I’m not just talking about scoring a lot of points. I’m talking about rebounds, drawing fouls, finding the open man with assists, and playing lock down defense. 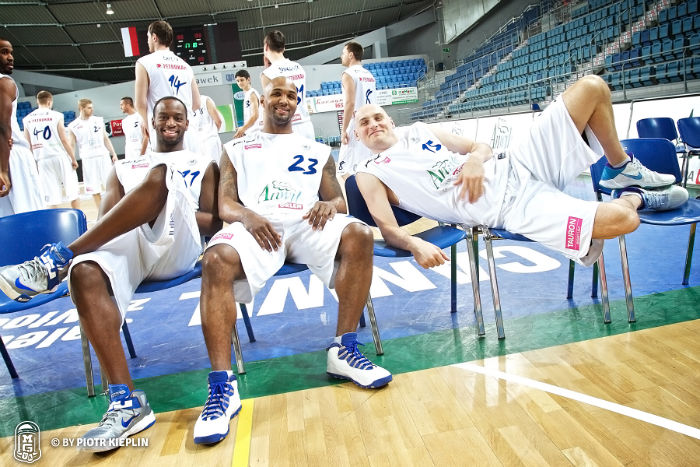 MG: What does it take to win the Polish Championship?

PF: The most important thing is to be mentally prepared. There will be a lot of ups and down throughout the series, and it’s important how the team will respond. On the highest level, teams are not separated very much by their talent or physical ability, so the mental side is much more important. Secondly, you need a group of guys that are all focused on one common goal. The 5 players on the court have to function as a collective unit. Lastly, you need a coach who will take the pressure off the player’s shoulders, and encourage them to trust in their abilities, creating a sense of true belief that their championship goals are attainable.

MG: What was it like to win the Polish Championship?

PF: It was a great feeling! I won 3 junior championships in Poland growing up, so from a young age I was very familiar with winning, and i felt that I would always be able to win at the higher levels. Before I won my first championship in the top division, I was playing 15 seasons! I found out that it was much more difficult than I had imagined.

MG: How much pressure is there for you to win another championship?

MG: From your experience winning the Polish Championship, what can you tell your teammates that can help them through this process?

PF: Take away your personal goals, and play for each other, 40 minutes of all out effort! It’s also important to enjoy the moment. This is supposed to be fun. Give your maximum effort, do everything you can to help your team win, and in the end you can accept whatever happens.